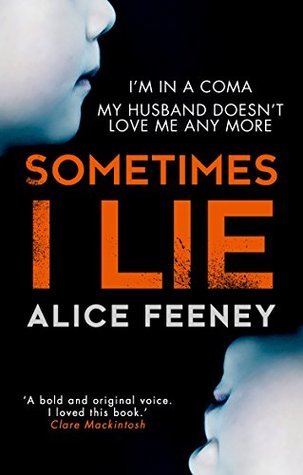 Amber wakes up in a hospital. She can’t move. She can’t speak. She can’t open her eyes. She can hear everyone around her, but they have no idea. Amber doesn’t remember what happened, but she has a suspicion her husband had something to do with it. Alternating between her paralyzed present, the week before her accident, and a series of childhood diaries from twenty years ago, this brilliant psychological thriller asks: Is something really a lie if you believe it’s the truth?

For fans of books that will mess with your head, have I got a recommendation for you. We’ll start with the unreliable narrator… This book does that perfectly. With a title like Sometimes I Lie, you’d think that should be enough to keep you from trusting every word that oozes from her mouth. And you may be successful. But, you probably won’t be.

Next is our cast of characters. They all feel like pawns in a chess game, except you can never really be fully sure whether or not they are all pawns. Is one of them actually the king in disguise? See, unreliable narrator. I also thought that each character was unlikable in their own unique way, and for some odd reason that drove me to keep going just to see how it would end for each of them.

And last is the story. You’re gonna get emotionally invested in our main character; you’re gonna hate her, and feel bad for her, and then you’re mouth might do that thing where you can’t close it. There might be a twist, as you can expect from a thriller novel. You may be shocked by it, or you may have seen it coming miles ago at that trademark point in a thriller novel when our minds wrestle between sure and unsure. You know, that point when we think we’ve figured it out already and the book is only half finished. Sometimes we do, but sometimes we don’t. Don’t forget: unreliable narrator.

There isn’t much else I can say about the book without giving anything away. It was a fun read and I really enjoyed letting my brain work itself out.

Follow I Sense A Story on WordPress.com
Join 83 other subscribers