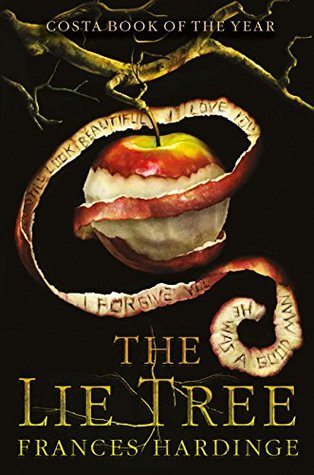 Faith Sunderly leads a double life. To most people, she is reliable, dull, trustworthy—a proper young lady who knows her place as inferior to men. But inside, Faith is full of questions and curiosity, and she cannot resist mysteries: an unattended envelope, an unlocked door. She knows secrets no one suspects her of knowing. She knows that her family moved to the close-knit island of Vane because her famous scientist father was fleeing a reputation-destroying scandal. And she knows, when her father is discovered dead shortly thereafter, that he was murdered.

The Lie Tree is a slow-burning mystery that is full of surprises and characters you’ll both love and hate. There’s an ancient tree that is rumored to hold secrets and feed on lies. Some say the tree has been found and if that is true, Faith’s family may just be its next victims.

I really enjoyed the progression of events and information as my eagerness to discover the biggest secret of them all kept me up reading well into the night. Our main character Faith is not only an inspiring fictional personality, but one whose development throughout the story is very well done. I was delighted to find out that like her father’s research snake, Faith sheds her old skin and reemerges with new eyes and a don’t-mess-with-me attitude. I can dig it.

The tree itself is fascinating. The idea of a plant that exchanges secrets for lies is such an interesting concept, and ultimately why I decided to give it a try. The tree has ways of defending itself, and so do those who know of its existence. Fruit is how it communicates, but its speech is not straightforward. The bigger the lie, the bigger your reward. But don’t expect it to just give its secrets away; you still need to flesh the information out for yourself. Tread lightly and don’t get addicted to the rush.

Everyone wants a piece of the fruit: archaeologists, politicians, scientists (though they’ll never admit it), even members of your own family. Knowledge of the tree is even dangerous in its own way. Ultimately, you’ll need to keep on your toes as you decipher motives, identities, secrets, and lies.

Which do you think will build quicker: the secrets, or the lies?

Thanks for reading! You can find the Goodreads page here. If you’ve read it or are considering doing so, share your thoughts in the comments below!